Yesterday it was #favechildrenspoetry day on Twitter, organised by the wonderful Brian Moses – the results of which will be on his blog, soon. His own favourite children’s poetry books are already there.

I tweeted some of my own favourites – but most of my children’s poetry books have poems in that I love.

A few of the books I tweeted yesterday were written by Gerard Benson. Gerard Benson was an excellent poet, story-teller, singer and teacher (and friend) who died in 2014. I have all his poetry books, but the two following books which he edited I would particularly recommend to any children who like writing, and anyone writing for children.

I take these out again and again – they are entertaining and useful, but they also contain a little slice of Gerardness which I miss. 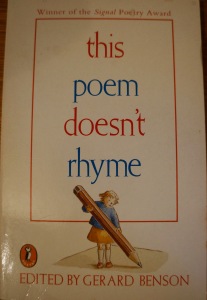 ‘this poem doesn’t rhyme’ won the Signal Poetry Award (and, incidentally, contains one of my favourite poems, What For, by Noel Petty). It was written because Gerard noticed children felt poems must rhyme, and added it to their own poems, even if the resulting rhymes meant their poems made no sense. So he chose a number of poems, accessible to children, that they enjoyed, that don’t rhyme. The poems chosen include work from all ages, cultures and countries. The book is packed with alliterative poems, concrete poems, imagist poems, sound poems, riddles and more. Published by Puffin, you can still buy it here. 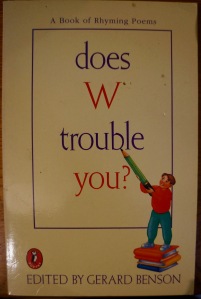 ‘does W trouble you?’ is the sister book of rhyming poems – it contains a riot of rhyming forms all explained with Gerard’s witty and engaging commentary. In the introduction Gerard talks to a ‘A. Poetry-Lover’ about the book. This is one of things he said:

The poets care how poems are made. What the poem is saying is, of course, important. But with poetry, the sound it makes can be just as important. Rhythm is even more telling than rhyme.  Many readers read with their ears as well as their eyes. In fact, it’s a good idea to read poetry aloud, whenever possible.

‘does W trouble you?’ is also published by Puffin, and available on Amazon, here.

If you’d like to hear some of Gerard’s poems read by himself, he is on the poetry archive here.