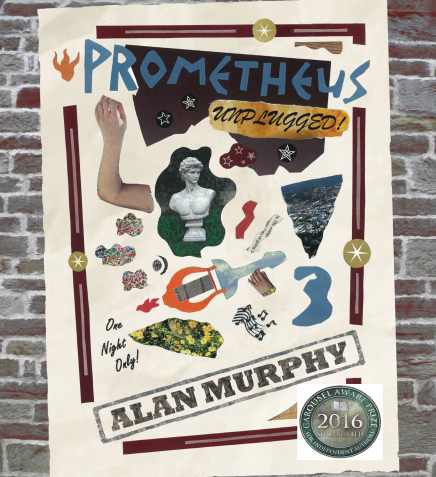 Alan Murphy originally trained as a fine artist, but now describes himself as a ‘wacky rhymester’. He  lives in Ireland and has given many public readings at the Electric Picnic, the West Cork Literary Festival, the Mountains To Sea Festival, Poetry Now, Ireland’s Children’s Book Festival (2010, 2011 and 2012), Waterford Writers Weekend, Lismore’s Immrama festival and Phizzfest.

Prometheus Unplugged was published in 2014, but poetry books written for older teenagers are few and far between.

In children’s poetry I’ve never read anything quite like this before and suspect for this reason alone it will appeal to teenagers from 14 on.

Music is the theme… and the poems, from those incorporating thinly-disguised, heavy metal hero Ozzie Osborne or Greek Gods in a stadium in an Elysium field to cows fed up with cud watching rooks, parrots and robins at the hottest thicket in town are hip hopping with energy and surrealism.

It’s a beautifully produced book with Alan’s own artwork the perfect foil – which perhaps explains why its a bit pricey for a teenage budget at £11. However – there is much to enjoy for those of older than that!

MOBIUS AND HIS BAND

The coolest cats in the land?

And the hippest of all

At the geometry ball

Was Mobius and his band.

Those dudes sure had real flair,

Their sum was not a square

And they did insist

That you dance the twist

To their looped groove wild and rare!