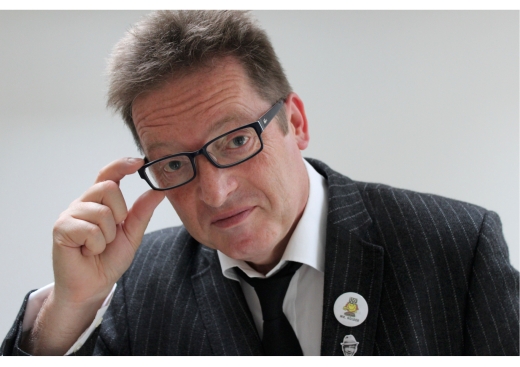 Paul Cookson has visited around 4000 schools, libraries, festivals, front rooms, written and edited over 60 titles – including the best selling The Works  – and has sold over a million books. He is a National Poetry Day Ambassador. Everton Football Club commissioned a poem for their season ticket campaign and the Everton Home poem which can be found online; it has been played on the big screens at Goodison Park. His collection  The Very Best Of  (Macmillan) contains many of his signature poems. His new collection for younger children, There’s a Crocodile in the House is reviewed here. Paul’s website is here and his Twitter here. 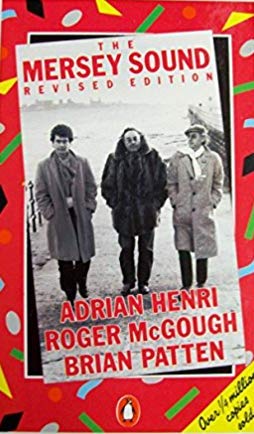 Like many of my generation ( yes, I am that old ! ), this was the first book to switch my poetry light on. Poems that didn’t look like the poems we had to read at school, poems that were funny and ordinary – in short poems that made us think we could do it too. Roger McGough has always been one of my very favourite poets – whether for children or adults – and these days I still look forward to any brand new releases. This is where it all started. Just wonderful. 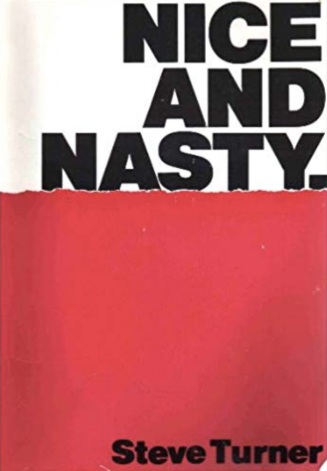 This was a large format collection of poems. I lent my copy to a French girl and she never returned it … so I don’t have the original anymore. But I remember the simplicity, fun and wordplay – and have followed Steve ever since. Short poems are fun / you can tell at a glance / whether you like them or not.

Always a fan of Lancashire folk singer and comedian I bought this collection and “The Singing Street” from his mailing list. “Up The Boo Aye …” was a sumptuously presented colour collection of mad children’s poems! So much fun. “The Singing Street” was black and white , illustrated, with poems about childhood and growing up. Both had a profound and inspirational effect on me over the years. His poems for adults are stunning too.

I love the look of these books – they are spacious where the poems and pictures have time to breathe. I hate cluttered books. There is fun a plenty – crazy rhymes and wordplay and stuff that just makes me smile. I could have picked any one of his books but this is a cracker.

Salford Road, Den To Let … and more. Poems I wish I’d written! I love the wry humour and conversational tone that Gareth infuses into his poetry. There is warmth and nostalgia, humour and pathos. Everyone should have this collection – it is that good. And our love of Everton ( and poetry ) made us friends – mostly Everton though!

THE RAIN IN PORTUGAL – BILLY COLLINS

A few years ago I went to the Festival Hall – mainly to see Roger McGough – but Billy Collins was there too. And I loved his work there and then. Somewhat ordinary and understated there is a profundity lurking that catches you unawares. He captures moments majestically and magically. Simple, straightforward, yet with hidden depths – poetry we can understand.

THE VERY BEST OF PAUL COOKSON

I’m tempted to go for my latest collection – “There’s a Crocodile In The House” ( your latest is always a favourite ) – but I’m going to go for my VERY BEST OF because of the range of poems therein. As a performer who like to make audiences laugh you can get stereotyped as “that funny poet” ( and I love that, I really do! And I think funny poems are very much under rated – often by people who can’t write funny poems to be honest! ). But this collection has a real variety of styles, genres, subjects and emotions and poems that I’m really proud of. If you want laughs and joining in – well, go for “Crocodile”!!

When my children were small they loved the absurdity of Colin West’s poems, and the words in his picture books, and the illustrations for both. In fact, we still have them, we kept all our favourites. Colin studied Graphic Design and Illustration at various art colleges. His first book, a slim volume of nonsense verse, Out of the Blue from Nowhere, was published by Dennis Dobson in 1976 – I am the proud owner of one of these! He went on to write and illustrate some sixty children’s books, and now lives in Sussex and writes and draws for his own amusement, mainly. However, he has published two rather wonderful recent collections The Funniest Stuff and Bonkers Ballads, both of which are stuffed with Colin’s delightful, witty poems and charming colour illustrations.

Thanks Liz, for inviting me to write a little about some of my favourite poetry books for children. I had to leave out so many! But here goes with some real faves …

Hooray for the editor who brought together Ogden Nash and Quentin Blake for this joyful book in 1979. Rarely has such a witty poet been served by such a witty illustrator (or vice versa).

This anthology (along with its three companion volumes) was a great inspiration to me back in the 1970s. Tomi Ungerer’s lively illustrations bring to vivid life many old and at-the-time-new poems. Cole was a great champion of Shel Silverstein and did much to popularise comic and also “serious” verse.

First published in 1927, then reissued with new illustrations by Margaret Wolpe, this book represents Walter de la Mare at his most playful. Words tumble, ever poetic, from his fertile imagination. Not one for avoiding “difficult” words, or even creating his own if they sound right — a stone is described as corusking in a ring — anyone heard of that word?!

Being born in 1951, I was the perfect age for this book, which was quite unlike else published at the time. Unfortunately, no one bought it for me! Of course, I caught up with it later. The illustrations are far from slick, but no Royal Academician could better them. I  could use all the usual words to describe Spike — madcap, zany, anarchic etc., but in the end, Milligan is Milligan is Milligan, and we are all thankful for that.

Rhymes Without Reason (Eyre and Spottiswoode, 1944)

Christopher Reid’s little gem was published in a limited edition in 2001. Delightful wordplay reaches new heights here and it is accompanied by Sara Fanelli’s charmingly surreal illustrations. So refreshing to see something like this published in this century. (They also collaborated earlier in 1999, in  All Sorts, which is more easily available.) 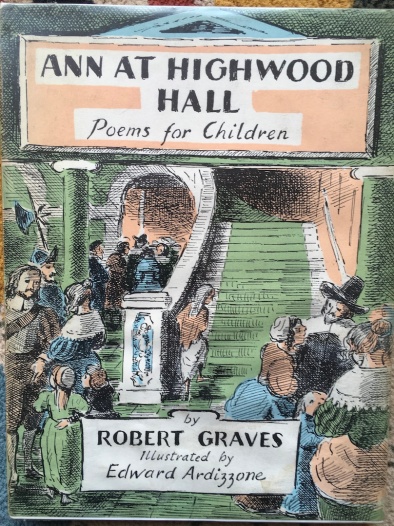 Anyone who knows me knows I love the work of Edward Ardizzone, who in his time illustrated much poetry, and here he graces a collection by Robert Graves, whose verses have a timeless quality. The title poem concerns a young girl who escapes domestic violence and lives semi-ghostlike in a grand house. It’s eerie and sad, and perfectly pictured by Ardizzone.

I assembled a book of my own poems in 2001, The Big Book of Nonsense, (Random House) and always hoped for a paperback edition. I produced a cut-down version of it with new illustrations, added some new rhymes and Walkers published it in paperback. Some of the poems still make me laugh!

I was introduced into the witty world of Colin West when my children were little and we all enjoyed Pardon said the Giraffe and Not Me said the Monkey. We soon found Colin’s own charming, ridiculous and funny poems, illustrated in his unmistakably colourful and delightful style. I’ve never read anything or seen anything by Colin that hasn’t made me smile. Poetry illustration is a real skill – so I’m delighted he has sent this exploration of the history of poetry illustrators he loves.

Thanks, Liz, for inviting me to contribute to your blog. Where to start? Well, I’ve enjoyed making up rhymes since I was about ten (an excellent age to be!) and I’ve enjoyed drawing for even longer, so maybe it was natural for me to combine the two interests.

I’m fascinated by the juxtaposition of poem and image. Let’s go back to when I was ten years old. There was a radio programme we listened to at school called Singing Together. The booklets that we sang from had wonderful illustrations accompanying the songs we sang. I studied the pictures (by top artists such as David Gentleman and Shirley Hughes) as much as I delighted in the words and music of those old folk songs.

Brian Wildsmith illustrates one of my favourite folk songs from Singing Together:

As a teenager, many of the poetry books I was beginning to collect had, at least, eye-catching, well-designed covers, if lacking in illustrations inside. I couldn’t resist these groovy covers!

A few, such as Ogden Nash’s I’m a Stranger Here Myself had illustrations by Maurice Sendak, and Stevie Smith added her own inimitable drawings to her books.

The unique talent of Stevie Smith:

Here, all round genius Mervyn Peake illustrates his own nonsense poem:

American phenomenon Shel Silverstein shows how it can be done … 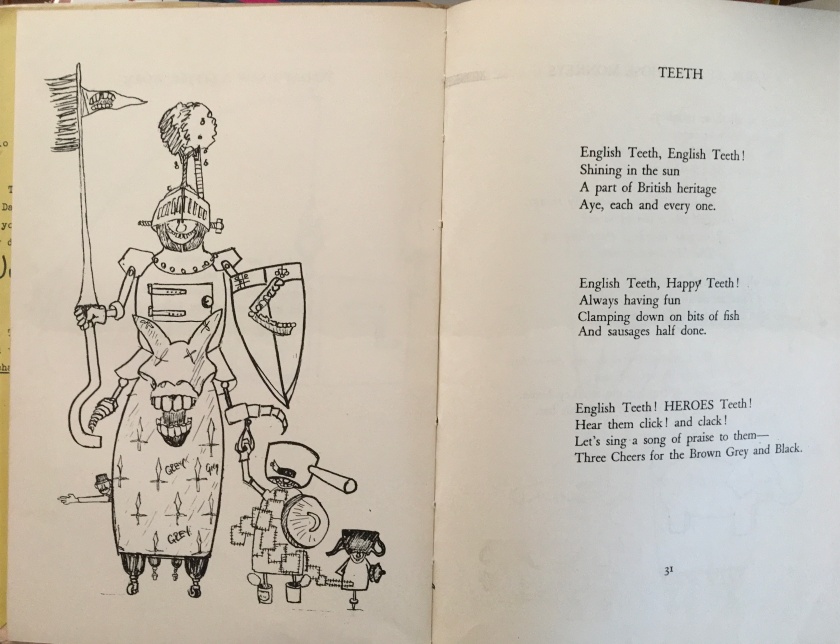 At art college, I hand-lettered my own little collection of  nonsense verse, Tomorrow I’ve Given up Hope:

As my interest in poetry broadened, I collected books from earlier times.

John Glashan lends his distinctive drawings to Alistair Sampson’s verse in the 1950s:

E. H. Shepard illustrated other poets than A. A. Milne. This book is by Jan Struther from 1932:

A marriage made in Heaven: Ardizzone’s drawings grace the pages of a book by Robert Graves:

Back in the 1930s, during the heyday of humorous verse, many books by rhyming geniuses such as Harry Graham were appropriately illustrated. It wasn’t something exclusively for children.

Maurice Sendak for an adult collection by Ogden Nash: 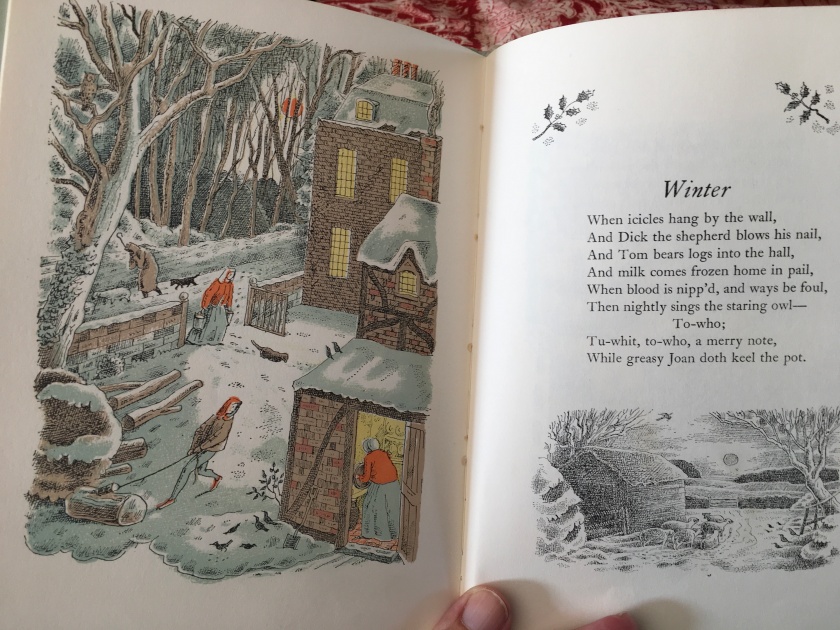 Sadly Gerard Hoffnung‘s final project, illustrating for Guinness in one of their poetic booklets for doctors. He died soon after at only 34:

Recently, the last years of the twentieth century gave us many well-illustrated children’s poetry books.

Like many of my generation of children’s writers, I was fortunate in having many of my poems anthologised and illustrated by a range of great illustrators.

This early illustration by Nick Sharratt from 1990 really captures (and adds to) the fun of my little rhyme:

The tradition continues to a lesser extent today.

Cobbling together a new book!

It would be interesting in schools if children illustrated each other’s poems. Or of course, do your own. You don’t have to be the greatest artist. No one could illustrate Spike Milligan’s madcap verse better than himself. And Roger McGough and John Hegley have both added their own quirky drawings to charming effect. So I’d say if you enjoy writing poems, try adding a drawing. And if you enjoy drawing, try adding a poem!

Colin’s book, published by Walker, can be bought here: Never Nudge a Budgie, and his latest book is available here: The Funniest Stuff.

Y is for Malala Yousafzai